Dh2 billion worth of real estate deals recorded in Dubai

in Attractions, General, Guide, Things to do
Reading Time: 3 mins read
A A

In Dubai, it is impossible to drive very far without seeing a mosque or two. These mosques are not just places of worship, but they are also beautiful architectural structures. The Jumeirah Mosque is one of the most famous mosques in Dubai. The site is also one of Dubai’s most important cultural and historical sites. Due to its unique position as one of the few mosques that permit non-Muslim visitors within the UAE, Jumeirah Mosque Dubai is popular with residents as well as tourists who want to experience the culture of the city. The white stone façade, elegant minarets, and aesthetically pleasing landscaping of the Jumeirah Mosque, which is located along the lovely Jumeirah Beach Road, give it a serene atmosphere.

What Makes This Mosque So Special?

Jumeirah is best known for its quirky cafes and plethora of cosmetic and beauty clinics, but Jumeirah Mosque is actually one of the area’s oldest landmarks. HH Sheikh Rashid Bin Saeed Al Maktoum, ruler of Dubai at the time, built it. The construction of the Jumeirah Mosque started in 1976 and ended in 1979. One of the coolest Jumeirah Mosque facts is that it is featured on the AED 500 note!

Often referred to as one of Dubai’s most photographed mosques, Jumeirah Mosque is unique for several reasons. The structure is constructed entirely of pure white stone, which is created in the traditional Fatimid style, which originates from Egypt and Syria. The domes feature intricate geometric designs, calligraphy in Arabic, and keel motifs. The mosque is also known as the ‘two minaret mosque’ because its two minarets frame a central dome. Jumeirah Mosque can accommodate 1,300 people, although people will also gather outside the mosque during Friday prayers!

The compound of Jumeirah Mosque consists of the mosque itself, lush landscaping, and covered walkways leading to an outdoor ablution area and an indoor meeting hall. You will be mesmerized by the arches and columns of the main prayer hall, the green carpeting, and the stained glass windows. At the opposite end of the entrance, you will find the mihrab, a niche in the wall indicating the location of Qibla, or the direction of prayer. The peach and blue ceilings are inscribed with verses from the Holy Quran. Beautiful calligraphy, geometric patterns, intricate designs, and chandeliers grace the walls. 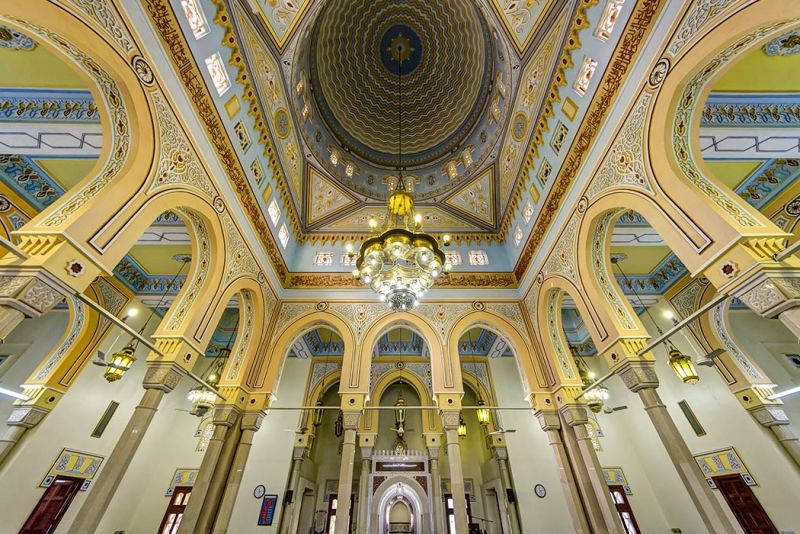 Jumeirah Mosque Guided Tour: What Is It?

Jumeirah Mosque in the UAE aspires to be more than just a building with stunning architecture, but also a mosque that is open to non-Muslims. Sheikh Mohammed Centre for Cultural Understanding offers these tours under the philosophy of “Open Doors, Open Minds”. Jumeirah Mosque tours are a great way to learn more about the Islamic faith and local culture!

The tour of the Jumeirah Mosque begins at the majlis, the traditional sitting area of a home in the UAE, where visitors must register 30 minutes prior to the tour. Guests can enjoy Emirati refreshments, such as Arabic coffee and tea. Visitors will then be guided to an ablution area where the tour guide will explain and demonstrate wudu, a ritual that is performed before praying. Once inside the main prayer hall, visitors will have the opportunity to learn more about the local culture and faith, and to ask questions.

From Saturday to Thursday, the guided tour takes place at 10:00 am. Friday is not a tour day at the mosque.

The mosque does not charge an entrance fee, but a guided tour costs AED 25 per person. While there is no need to make a reservation, visitors should arrive at the mosque 30 minutes before the tour begins.